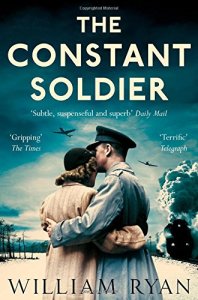 Upon finishing this book in the early hours I found I had not only a lump in my throat, but I was speechless at the intensity of the narrative. This is not a book you can easily set aside and forget about (hence why I was reading until after 2.30 a.m.!)  The story remains with me even now and I’ve no doubt it will remain with me for some while to come –and I don’t say this lightly, it’s one of the finest books I have ever read.

Every striking scene, every imminent threat, every laboured dialogue exchange felt as though I were a fly on the wall observing the commands from the hierarchy worm their way downward the ranks only to become an act of obedience from the subordinates, regardless of the grotesque consequences.

How the handful of prisoners lived with the onslaught of fear and a routine so punishing – well, I don’t think I will ever comprehend. Ironically, even though this expendable workforce is exhausted, physically and mentally, it’s all to help the German officers recuperate in a rest hut to which The Constant Solider has been assigned.

Work detail is torturous, particularly for a one-armed, reluctant solider with burns covering most of his body. Not only does he have witness the ‘customary’ ill-treatment of the women prisoners as they carry out infinite housekeeping tasks to ensure a pleasant stay for the guests’, he recognised one of the spectral, emaciated frames inhabiting the raggedy prison clothes from his life before he was consigned to the army.

The Constant Soldier, Paul Brandt, is an especially distinctive character and represents the good / evil divide in the midst of war. The reasons why he came to serve in the army and then accept a position at the hut in spite of his extensive injuries are skilfully and sensitively depicted. It’s his expressions differ from the usual offerings. For instance, when his face expresses any kind of emotion a smile could easily be misconstrued a grimace as the skin on his face pulls taught emphasising his prior wounds.

By taking ordinary words and using them to extraordinary effect, each sentence embodies courage, commitment, misery, atonement, regret and sacrifice. This haunting novel shows how circumstances conspire against the intended course of your life and how humanity still lingers in remote quarters, while offering reflection from allies, prisoners and oppressors who have become tangled in Hitler’s wicked and tyrannical ambition.

Feel the partisans’ breath on your neck, the boot of an SS guard, and the rattle of the window panes as an underestimated opponent grows near – then feel the impression The Constant Soldier will leave on you.  HIGHLY (& ABSOLUTELY) RECOMMENDED.

Rating:  This is one of those awkward situations where a book has once again broken my rating system. Quite frankly it exceeds 5/5 – seriously, just read it immediately!

(Huge thanks to the author and publisher for arranging this review copy for which it is my absolute pleasure to provide an unbiased review.)

‘Haunting, passionate, William Ryan’s The Constant Soldier is a subtle WW2 thriller of horror and love with an utterly gripping countdown to Gotterdamerung. One of my favourites of the year’ Simon Sebag Montefiore

1944. Paul Brandt, a soldier in the German army, returns wounded and ashamed from the bloody chaos of the Eastern front to find his village home much changed and existing in the dark shadow of an SS rest hut – a luxurious retreat for those who manage the concentration camps, run with the help of a small group of female prisoners who – against all odds – have so far survived the war.

When, by chance, Brandt glimpses one of these prisoners, he realizes that he must find a way to access the hut. For inside is the woman to whom his fate has been tied since their arrest five years before, and now he must do all he can to protect her.

But as the Russian offensive moves ever closer, the days of this rest hut and its SS inhabitants are numbered. And while hope – for Brandt and the female prisoners – grows tantalizingly close, the danger too is now greater than ever.

And, in a forest to the east, a young female Soviet tank driver awaits her orders to advance . . .

William Ryan’s Captain Korolev Novels have been shortlisted for numerous awards, including the Theakstons Crime Novel of the Year, The Kerry Group Irish Fiction Award, the Ellis Peters and John Creasey Daggers and the Irish Crime Novel of the Year (twice). William teaches on the Crime Writing Masters at City University in London. His latest novel The Constant Soldier has been described by AL Kennedy as “a nuanced, complex and gripping tale of guilt and love that captures the chaos at the end of World War Two”.