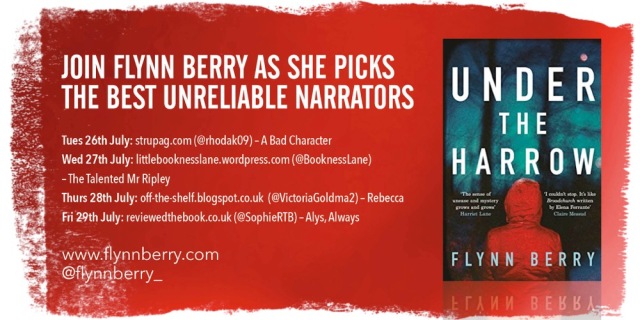 I’m delighted to welcome author Flynn Berry to Little Bookness Lane today as part of her Under the Harrow blog tour where she’ll be sharing her pick of some of the best unreliable narrators with us.

You can discover more about the author and her book in just a little while, but right now Flynn has kindly prepared this fascinating guest post…

My novel, Under the Harrow, is about a woman, Nora, investigating her sister’s murder. As the police inquiry unravels, Nora becomes obsessive and reckless. Some of my favorite books have unreliable narrators, who are duplicitous, volatile, and thrilling.

Tom Ripley in Patricia Highsmith’s The Talented Mr. Ripley isn’t exactly an unreliable narrator. He’s quite direct. By the time Tom invites Dickie for a boat ride, we know exactly what he plans to do. “In each motor-boat, Tom noticed, was a round weight of cement attached to a line, for anchoring the boat.” He wants Dickie Greenleaf’s life, and, as with all great unreliable narrators, it’s easy to believe he somehow deserves it more: “Tom had an ecstatic moment when he thought of all the pleasures that lay before him now with Dickie’s money, other beds, tables, seas, ships, suitcases, shirts, years of freedom, years of pleasure.”

The way Tom sheds his old identity is bizarrely, perversely inspiring. He changes his voice, his expression, his posture, his handwriting. And, wonderfully, he excises all the parts of himself he dislikes, like his dullness and shyness. Reading it made me marvel at how much people can transform themselves, out of a longing to be someone different, or out of rage. It seemed somehow miraculous. “It was Paris,” says Tom. “Wonderful to sit in a famous café, and to think of tomorrow and tomorrow and tomorrow being Dickie Greenleaf!” 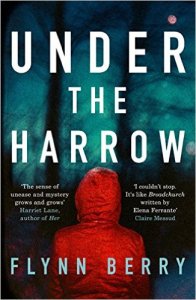 When Nora takes the train from London to visit her sister in the countryside, she expects to find her waiting at the station, or at home cooking dinner. But when she walks into Rachel’s familiar house, what she finds is entirely different: her sister has been the victim of a brutal murder.

Stunned and adrift, Nora finds she can’t return to her former life. An unsolved assault in the past has shaken her faith in the police, and she can’t trust them to find her sister’s killer. Haunted by the murder and the secrets that surround it, Nora is under the harrow: distressed and in danger. As Nora’s fear turns to obsession, she becomes as unrecognizable as the sister her investigation uncovers.

A riveting psychological thriller and a haunting exploration of the fierce love between two sisters, the distortions of grief, and the terrifying power of the past, Under the Harrow marks the debut of an extraordinary new writer. 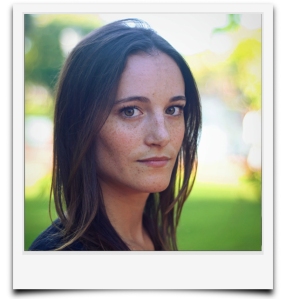 Flynn Berry is a graduate of the Michener Centre and has been awarded a Yaddo residency. She graduated from Brown University. Under the Harrow is her first novel.

She is represented by Emily Forland at Brandt & Hochman. The editor of Under the Harrow is Lindsey Schwoeri at Penguin.

CONNECT WITH THE AUTHOR:

Huge thanks to Flynn Berry for taking the time to write this guest post and also to Rebecca Gray for organising the tour, which stops with Victoria Goldman at Off-The-Shelf Books tomorrow!