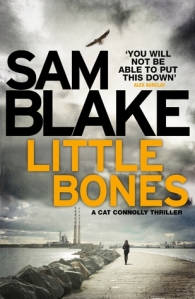 Little Bones is an intriguing crime novel that grabbed my attention from the off. It features the varied locations of Ireland, London, and Las Vegas, which kept things bubbling along very nicely.

The catalyst for this story is the chance discovery of tiny bones that are carefully sewn into the hem of an antique wedding dress (how creepy is that?!). The mystery of the eerie find continues throughout, as there’s little assistance forthcoming from the owner of the frock, who claims to be as much in the dark as the authorities investigating the case of a reported break in at her home.

Zoe Grant, an artist about to launch her career at a show, and granddaughter of the Lavinia Grant retail empire, is taken aback when the police call her back from preparations for her new exhibition. She appears unable or reluctant to co-operate, while the police crawl all over her home looking for solutions to identify the little person’s bones that have found their way into her possession.

My curiosity was immediately piqued as to why anyone would knowingly keep incriminating evidence in their house, especially if it could draw a swarm of media attention to the famous family name. It’s not until an unresolved private family saga raises its head revealing decades of manipulation that you see the clearer picture. Lavinia’s friend, Trish, has a particularly nasty streak (imagine a vengeful Patsy from Ab Fab).

Another story emerges in London when Emily Cox’s job alerts her to a confused, elderly lady. Mary, as she is known, shows signs of Dementia and her living conditions are dire. So, Emily unprofessionally takes her under her wing much to the surprise of her psychologist husband. I truly felt for them and their current predicament, as caring for Mary cannot fill the hole in their lives. It’s only by chance that the mystery of Mary’s mind is unraveled until we find she’s not the person Emily thought she was. Well, her story starts to get very, very interesting…

And who is that awful Angel Hierra character? He’s skulks around the edge of the story for the most part and left me thinking “what’s he got to do with anything?” While his true motives aren’t shown until later, we know he’s left trouble in his wake in Las Vegas and is intent on causing much, much more as there’s a very personal score in Ireland he needs to settle.

The ongoing investigation could be potentially hindered by the domestic life of one of our leads, twenty four year old Detective Garda Cathy Connolly. To say she’s mortified by current events would be an understatement, and our author handles the subject well, even if our lead doesn’t! It’s clear this particular case is taking its toll – she might have ample courage in the kickboxing arena, but not to face facts about her own life.

Little Bones has suspense, mystery, suspicious death, festering families, a brilliantly executed plot, PLUS characters with plenty of flavour … aaand breathe. I’m looking forward to getting to know them better in the next book – and after THAT totally unexpected cliff hanger there MUST be another one, I can’t wait to see what happens next! Just one thing, I’d recommend giving it your undivided attention, there’s so much to keep you occupied it’s quite easy to lose your thread in this intricate investigative tapestry.

(My sincere thanks to the publisher for permitting me to download this title from NetGalley.)

For fans of Alex Barclay and Niamh O’Connor, Little Bones introduces Cathy Connolly, a bright young heroine set to take the world of crime fiction by storm. Attending what seems to be a routine break-in, troubled Detective Garda Cathy Connolly makes a grisly discovery: an old wedding dress – and, concealed in its hem, a baby’s bones. And then the dress’s original owner, Lavinia Grant, is found dead in a Dublin suburb. Searching for answers, Cathy is drawn deep into a complex web of secrets and lies spun by three generations of women.

Meanwhile, a fugitive killer has already left two dead in execution style killings across the Atlantic – and now he’s in Dublin with old scores to settle. Will the team track him down before he kills again? Struggling with her own secrets, Cathy doesn’t know dangerous – and personal – this case is about to become…

‘Instantly gripping, perfectly paced, and filled with a brilliant cast of characters, led by the utterly likeable and relatable Detective Cathy Connolly …from the murky depths of these buried secrets comes an ending that truly shines.’ – Alex Barclay

Sam Blake is a pseudonym for Vanessa Fox O’Loughlin, the founder of The Inkwell Group publishing consultancy and the hugely popular national writing resources website Writing.ie. She is Ireland’s leading literary scout who has assisted many award winning and bestselling authors to publication. Vanessa has been writing fiction since her husband set sail across the Atlantic for eight weeks and she had an idea for a book.