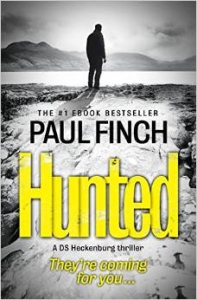 DS Heckenburg is back in town in a plot that’ll draw you in, Heck, line and sinker.

HECK IS BACK IN TOWN!

I last encountered ‘Heck’ during his last investigation in the Lakes (in the eerily good Dead Man Walking). Although references are made to this past case and touches on a little on previous history, it’s only briefly. It certainly wouldn’t prevent someone new to this series from enjoying this book. The writer has made it incredibly easy to get stuck right straight in, just like Heck when he’s solving his cases!

The previous book was unnerving, but for me Hunted was so much better. It’s non-stop, it’s grim and it has even weirder perpetrators – the perfect crime combo!

With the level of heinous crimes being committed, the Serial Crimes Unit needs skilled officers like DS Mark Heckenburg: he’s hands-on, a quick-thinker and looks outside the box for answers.

Which is why he’s the first person his boss, DI Gemma Piper, calls on when her mum raises concerns about the death of a member of her golf club. Something seems peculiar to Piper’s mother. One Harold Lansing had recently died in an unfortunate car accident outside his home. However, prior to this he’d been involved in another strange incident where a model aeroplane knocked him unconscious and into water where he was fishing.

Is it coincidence, or something more sinister?

Cue Heck. As ‘odd’ is his speciality, he’s the best officer to apply his unique investigative skills and look for answers.

But what he can offer with his irregular methods solving crime, he loses in subtlety. He makes his way to the local station and in his usual style he quickly manages to ruffle a few feathers, including those of his temporary partner, the young and ambitious DC Gail Honeyford. Needless to say they don’t see eye to eye on the investigation.

As the case progresses, it becomes apparent that more ‘freakish accidents’ have occurred around leafy Surrey than would be considered normal. Once again, our main lead comes into contact with some very unsavoury characters and has a bizarre list of suspects to wade through. Of course, it’s all in a day’s work for Heck. But he should be careful not to draw the wrong kind of attention to himself…

If you like action-packed crime with a showdown or two thrown in, then the stage is set with Hunted. After reaching the end of this gruesome crime-spree in DS Mark Heckenburg’s latest case, I am officially #hookedonheck.

(My sincere thanks for the publisher for allowing me to review this title. It’s a little cracker, so thank you.)

What to read more about Heck? Click on the book cover to see my review of ‘Dead Man Walking’: 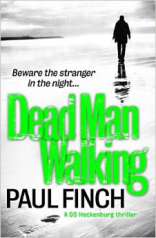