Following the opening scenes of a less than flawless dispersal of cremated ashes on top of a hill, Blame sees the rehabilitation of a life after laying ghosts to rest. Its stark triggers of regret, judgement and recognition generates both contempt and concern for the main character, as he revisits the misery of his childhood and fumbles his way through an indifferent period of grief.

As a rational, intelligent pharmacist, Lucas Marr is familiar with dissecting data. Yet his usual analytical tactics are of no use when he learns that the father he hasn’t seen for ten years has passed away. He trades his current salvation from addiction to binge on precious moments that cannot be revived, as retakes are no longer permitted.

His father’s sudden departure attempts to lure Lucas into temptation. As his will-power strikes the delicate balance between giving in and giving up his gradual indecision feels intense and authentic. While Lucas revisits his past through a diary written by his outraged younger self, a boy who was caught in the crossfire without little explanation, he painfully overlooks an opportunity which diminishes his self-discipline further.

Events that coincide with significant dates in our recent traumatic history are written into the story. As the rest of the world continues to turn, Lucas escaped to the other side of it before he found what he was looking for. His struggles to make sense of earlier divisive instances compared with the incriminating present day recollections made me pause to think how we deceive our impressionable selves. As the circumstances surrounding his father’s death are clarified he has the opportunity to finally process his father’s behaviour and the reasons for it.

What I found particularly perceptive was the subtle evidence of caring from a distance. For instance, his father displays the photographs of both his children sitting side by side not only in different frames, but in periods of time: Lucas is forever a boy as there would be no opportunities to capture a new moment, while his younger brother Ryan has grown into an adult. Also Lucas’s diary was found among his father’s effects and contained the gradual decline of his blissful childhood contentment, the den he made with his neighbour, and the invader who trespassed on their friendship. I was a mere bystander and witnessing just how stealthily everything fell into oblivion was emotionally brutal.

Blame opens the door to the agony of life and invites its caustic and destructive challenges in. It’s so astutely written that have no hesitation in highly recommending it.

(I received a copy of this title from the publishers and it is my pleasure to provide an unbiased review.)

‘At a time when high-quality contemporary literary fiction is rarer than ever, Paul Read’s novels are a much-needed tonic’ Matt Thorne

It is the summer of 1989 when Lucas witnesses an event that will tear his family apart. Over a decade later, his estranged father succumbs to a suspected heart attack.

Lucas shuns grief and escapes to New York with his colleague Mariana. However, a dark secret from his past threatens to re-emerge and destroy the burgeoning relationship before it has even begun.

When his father’s girlfriend fails to reappear after reporting his death, the true cause of his demise falls under scrutiny. And as the startling truth comes to light, Lucas must confront the fact that father and son may not have been so different after all.

After gaining a first in Fine Art at the Kent Institute of Art and Design at Canterbury, Paul Read found employment at Foyles bookshop on Charing Cross Road before becoming a teacher. He has taught at several inner city schools as an Art and English teacher, both in England and Italy, where he currently lives with his partner and two children. He received a distinction in creative writing for his MA at City University London.

The Art Teacher was published in 2016 by Legend Press.

His second novel, Blame, will be published in April 2017. 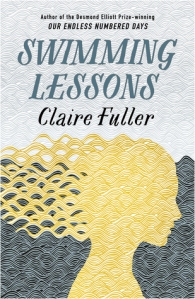 Swimming Lessons has  a distinctive grace – the enchanting quality of such exquisite writing is nothing short of an emotional ambush. It’s so tragically beautiful, flawless, magnificent even, I’m confident that when the cover is closed all of the words must huddle together in the dark to comfort each other.

Twelve years have passed since Ingrid disappeared from the Beach outside the Coleman’s home. It was 1992 when she stepped out of the house one day to never return from her swim, leaving a husband, two daughters and distorted memories of their family life in her wake.

So much time has elapsed and yet Gil thinks he sees her, his Ingrid, looking up at him through a book shop window where he tries to desperately retrieve the volumes his daughter has hastily donated. Before he can overthink anything, other than clutching a letter from Ingrid and the book he is holding at the time, he chases her down the street. But when he finds she has vanished he takes a nasty tumble and a trip to the hospital to deliriously recover from his ordeal.

Ingrid’s letters consume him. These intimate, soul searching letters that she creatively slipped between the pages of Gil’s precious book collection to join the random jottings already scrawled in the margins by their original owners, and keep them hidden from her children. Gil could probably tell you more about the minds of a thousand anonymous readers defacing his copies of literature than he could about his wife. But so much changed with the strokes of Ingrid’s pen.

Leading up to what would be her final swim on the Dorset Beach outside their home Ingrid tried to keep her head above water and she writes about their passion, the regrets, the betrayal, and the unexpected defeat of her efforts as her life frayed further around the edges. It would be as though her words were carved on her heart rather than paper.

Gil’s children have grown and are oblivious to the twelve year old mystery that is unravelling.  The younger daughter, Flora, continues to reach for the minutest optimism that all will be well, along with the memories of a delightful childhood, the trips to the beach, the misremembered moments they shared and can smile about. The eldest, and by far the more down to earth of the two, Nanette, recalls raising her unruly sister single-handed, taking on her mother’s role at the grand old age of fifteen and unselfishly sacrificing most of her life to the difficult circumstances imposed upon her.

Every raw and touching detail harvested from the Coleman’s turbulent lives is delicately mined with finesse, making Swimming Lessons quite possibly the most perfect book I have had the privilege of holding this year. Sometimes it’s not just about letting go but learning to, which is easier said than done on this occasion as I didn’t want to put this one down.

(I received an ARC of this title from the author and publisher with my thanks, and this is my unbiased review.)

The second novel from the author of Our Endless Numbered Days, which won the 2015 Desmond Elliott Prize and was a 2016 Richard and Judy Book Club Pick.

‘Gil Coleman looked down from the window and saw his dead wife standing on the pavement below.’

A possible sighting brings their children, Nan and Flora, home. Together they begin to confront the mystery of their mother. Is Ingrid dead? Or did she leave? And do the letters hidden within Gil’s books hold the answer to the truth behind his marriage, a truth hidden from everyone including his own children?

Claire Fuller’s debut novel, Our Endless Numbered Days, was published by Tin House in 2015 and went on to win the Desmond Elliott prize in the UK and was a finalist in the ABA Indies Choice Award, an IndieNext pick, and chosen as a Goodreads Debut Spotlight.

P.S. Look out for my publication day post on 26th January 2017 where I will be running a little giveaway to celebrate this wonderful book!