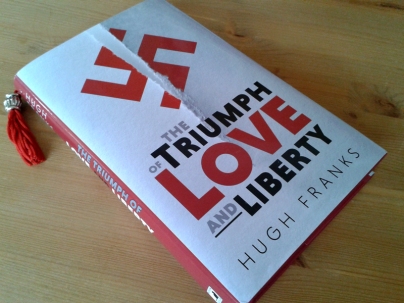 When little Paul Johnston is suddenly orphaned, the young Sussex lad ends up, by a series of strange events, being brought up in Hamburg by a German businessman during the turbulent inter-war years. Moving from 1930s Germany to an English public school, the conflicting influences of his youth are forced into the open when war is declared and he must choose on which side to fight – an issue further complicated by his falling in love with a young Englishwoman. Enduring a series of harrowing wartime experiences, from Dunkirk to the depths of a Russian winter, Paul battles to stay alive, desperate one day to be reunited with the only girl he has ever truly loved. This compelling tale of love in a time of war will sweep you along with the young soldier in missions that cover the length and breadth of Europe, as he changes from a naïve youth to a mature man.

At 240 pages this is a relatively short read, but a truly captivating one.  It’s both a wonderfully written and carefully considered story, concentrating on relationships in front of and behind enemy lines. It perfectly captures the emotions of war, misplaced loyalty and the beliefs we all hold dear, irrespective of which side we may have chosen to fight for.

This book summary may suggest a sweeping, war-torn romance and I’ve read other descriptions saying exactly that. I’d consider it much, much more. There’s also a psychological slant, why certain people are conditioned to do what they do, and the battle scenes later in the book are drawn entirely from a human perspective.

It begins by introducing the reader to the young and lonely Paul Johnson, who lived with his parents in Brighton (although they might as well lived apart with the distance they put between them and him). His background shows how a troubled childhood would affect his thought process in later years.

When he is orphaned, Paul’s story progresses from his English roots right through to his impressionable teenage years when he begins to establish a very different life in Germany living with his ‘Uncle Heide’. Upon seeing changes in the youngster coupled with potential trouble brewing on the rise of a new era in Germany, his Uncle reluctantly decides to send Paul back to England. He hopes that by attending a boarding school, the influences of the country of Paul’s birth will be beneficial, or at the very least a distraction.

A tragic pattern formed quite early in Paul’s youth as to the sort of character he would become. He doesn’t have a likeable personality and is controlling of others his age, showing little compassion toward them. And yet, the path his life takes is absolutely fascinating. Especially his friendship that blossomed with a quiet English Girl before the start of World War II and the impact of their relationship, which would have a profound affect on him and everything he was fighting for when the time came. She appears to be the first person he’s ever genuinely cared for.

A youth with a solid conviction can grow into a man gradually enveloped by confusion. This book offers a different take on an historical tragedy, and how easily young people’s minds can be persuaded to follow a lethal cause if the conditions are right, regardless of their original country of birth.

Well, I’ve read some cracking books lately, and this one is no exception. Highly recommended.

(My sincere thanks to the Publisher Book Guild Publishing for kindly providing a hard back copy of this book for review. Thank you for making contact through the blog, without which I may have never discovered Hugh Franks’ brilliance.)

Hugh Franks was educated at Hurstpierpoint College and Sandhurst. He joined his regiment, the 13/18 Royal Hussars, and with them took part in the Northwest Europe campaign from Normandy to the Baltic in the Second World War. He was twice mentioned in Despatches for bravery. After the war, he was a lecturer and instructor for the Army. He has written several novels, including The Dragon and the Needle (Book Guild, ISBN 9781909716261), plays, film scripts and short stories. A biography, Will to Live, won a US literary award in 1980.

You can discover more about this author’s work here: