Less than seventy miles away in France, men with grimy uniforms exhaled their final breaths in foxholes and filthy burrows, while back home lights were dimmed in sitting rooms as anxious relatives took up their listening posts…Ouija boards, moving tables, listening trumpets, mysterious lights, magic lanterns and crystal balls, all help the population confront its grief… 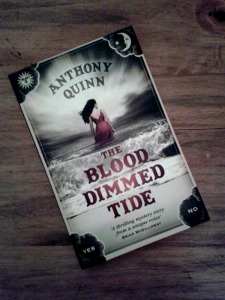 There’s some cracking artwork on the cover of this unusual crime solving mystery.

Considering the amount of twists and turns in the storyline, you’d expect this book to be much larger than it is!

It’s steeped in Irish history and myth, and portrays the turmoil of the era. Every portion of it makes a play for all five senses (six, if you count the supernatural).

Briefly, WB Yeats’ interest in the supernatural world is convincingly written into this story, as certain aspects from the reality of Yeats’ life were threaded throughout the pages. The famous poet sends his ghost-hunting understudy (and ex-medical student) to investigate the murder of a young woman, whose body had mysteriously washed up on a beach in Ireland, Yeats’ birthplace.

As the old saying goes ‘the plot thickens’. From the outset of the young man’s journey on the boat, a reoccurring theme accompanied his entire quest – he didn’t know what he’d let himself in for, and he had no idea who to trust.

The writer’s descriptions were phrased quite beautifully. I’d go as far to say that the style was quite calming to read.

Despite this, there were parts that I just found myself skimming rather than absorbing, just so I didn’t miss anything vital in the storyline. For some reason, I wasn’t as engaged with this book as I thought I would be, which surprised me as I do love a good mystery.

All in all I did find The Blood Dimmed Tide an enchanting and interesting read. It was well written and I’m glad I was given an opportunity to read it.

(I must thank Oldcastle Books (No Exit Press) for this book, which I was lucky to win in a competition they ran.)