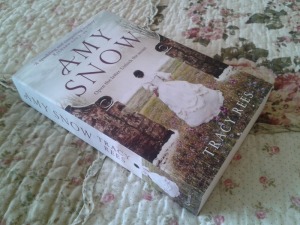 What is the ultimate gift you could you give someone? Hope? Freedom? Or a copy of this book? All of the above?

A delightful and inventive tale of friendship, heartbreak and surviving whatever life may throw at you. It’s written with absolute class and is a glorious example of a shining needle in a very large haystack (otherwise known as ‘a little beauty’).

In January 1831, a baby came into the lives of the Vennaway family of Hatville Court, but not in the traditional way it would appear.

The new born was not a bundle of joy and happiness, it was lying abandoned on the crisp white snow of the grounds.

Amy had arrived. And so, her journey had begun.

Her tiny, naked form was discovered by the youngest member of the Vennaway household. If it wasn’t for a feisty, impetuous girl by the name of Aurelia, the babe may never have survived – she owes her life to the young heir and will never forget it.

Escaping the grip of Hatfield Court

So, you would think that a decent enough life would be waiting for a baby who had survived the odds, yet Hatfield Court offered nothing but a miserable existence. For all their fancy airs and graces, the cruel and vindictive ways of the Vennaways left a lot to be desired. Aurelia’s mother was so vile they should have renamed the house ‘Hateful’ Court. I truly wanted to slap the scowl right off her face and all her venom with it. Lady Vennaway’s behaviour is explained late in the book, but you’ll have to see if you think this excuses her…I’m afraid that whilst I sympathise, I personally think not.

Only Aurelia truly fought the little girl’s corner; Amy was the sister she never had.

Seventeen years later, Aurelia tragically left the world, leaving Amy behind bleary-eyed and afraid. She was released from her life of servitude, which was a relief to both parties. Having been offered a token sum in the young woman’s will, Amy was sent speedily on her way. Before she left the grounds she was secretly handed a mysterious letter written by the recently deceased.

This was the first ‘clue’ which would lead her on a solitary journey, a concept completely alien to her. Upon her arrival to her previously unknown destination, it’s not too long before another letter comes to light. Before she can move on, Amy finds she must decode the hidden messages from her only friend in the world, who is no longer with her to offer advice.

“Open the door. Unlock the secret.”

A secret and patient chase for the next clue leads an unchaperoned Amy from place to place, putting her in awkward positions, accepting or declining invites to balls and events, and introducing her to a society she never knew existed. All the while, Amy considers if there is any place where she will truly belong.

Faced with suitors she didn’t know she would attract, social soirees where she doesn’t know how to act, and Aurelia’s bizarre and secret pact – will Amy figure out the final destination before she abandons the quest, like her mother abandoned her?

Soon, Amy begins to question Aurelia’s motives – is she making a fool of her from the grave?

Whilst the ending is not totally unexpected, the story itself is a delight to read. It’s one which moves at a gentle trot, not a gallop, allowing you to bathe in the atmosphere the writer has successfully conjured up.

And you know something? It’s makes pleasant change to reach end of a book without any profanity in it.

(I am grateful to Hannah Robinson of Quercus for agreeing to send this to me for review.)