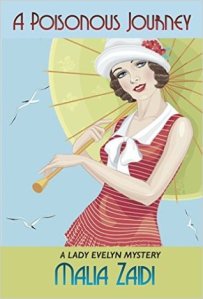 Leaving only a note to state her intended whereabouts, young Lady Evelyn Carlisle hastily packs to escape the monotony of her life with Aunt Agnes, leaving a miserable, rain soaked England behind her. She sails toward adventure and into the open arms of hospitality offered by her cousin, Briony and her husband, Jeffrey.

Their gorgeous Cretan home nestled amidst spectacular scenery and the warming rays of sunlight are everything she dreamed of – yet the idyllic surroundings are riddled with deceit.

Shortly after her arrival, the discovery of a body of among the grounds disturbs the welcoming atmosphere and leaves everyone wondering if they’ve been dining with a potential murderer. Suspicions are raised, but everyone seems too lovely or well-respected to morph from friend to fiend during the course of an afternoon!

Before long, Evelyn politely pokes her little nose into other people’s affairs, discretely, of course, as only a true Lady would. In the process she uncovers all manner of unsavouriness while dicing with danger herself on occasion.

Still keeping up appearances, Evelyn hopes her amateurish meddling will assist the authorities, who have been slow to produce results. Although the police have several lines of enquiries, their investigation appears as easy going as Island life itself. The young sleuth also wonders if her clue solving could help Daniel, an intriguing house guest and longstanding friend of the deceased. And if a murderer lurking in the shadows wasn’t enough, a callous thief is on the loose, as there are missing artefacts to find from Jeffrey’s museum dig!

Just how well do these English settlers know the close knit community and even their own acquaintances? All will be revealed by peeling back the layers of a world where a War changed the people in it forever. We see how secrets can breed unhappiness, but the bond between the cousins remains unbroken and the little conversation snippets into their personal lives are truly wonderful.

Combine the food, the fashion decisions, and the community spirit and there’s a genuine sense of Cretan life and culture, topped with a classic English twist. The island setting lifts what could have been a run of the mill mystery and turns it into an rather interesting read. There are no major thrills or gasps of horror in store, just a well written murder mystery of the gentler paced variety to keep things bubbling along until the end.

Personally, I found the pace a little slower than I’m used to, but it was an enjoyable distraction nonetheless. If you’re partial to a traditional who-done-it with a relaxed pace and delicate hints of romance, then A Poisonous Journey will be right up your street.

(My thanks to the author for providing a digital copy of this book for review purposes.)

The year is 1925, a time that hovers between two catastrophic wars, a time of jazz and sparkle, and a time of peace and reflection. For Lady Evelyn, struggling to outrun the ghosts of her tragic past, it is a time of transformation. Left orphaned after a fire when she was only four, Lady Evelyn Carlisle was raised in London by her stern aunt and uncle.

Now, twenty years later she has grown restless and is keen to escape her chaperone’s grasp. A letter from her cousin, Briony, living with her husband on Crete, comes at just the right time. Packing what she can, Lady Evelyn makes off for foreign shores. Welcoming her are not only Briony and her husband, Jeffrey, but also his handsome and mysterious friends, Caspar Ballantine and Daniel Harper. Though the latter carries with him tragic memories of the Great War, Evelyn is glad to be in their company. With the sun warming her back and the dazzling sea in her sights, this fresh start seems destined for happy days ahead.

Little does she know . . . What starts off as a sunny holiday quickly turns into a sinister nightmare, when Evelyn stumbles across the corpse of one of her cousin’s houseguests. Drawn into the mystery surrounding the murder, Evelyn embarks on a mission to discover the truth, forcing her to face her own past as well as a cold-hearted killer. With the help of her cousin, the handsome local police detective, and the mysterious Daniel Harper, will she uncover the truth, before another life is claimed? A varied cast of characters, an engaging mystery at its core, an exotic setting, and a thoughtful, plucky heroine provide a story that will appeal to fans of many genres.

Connect with the author: