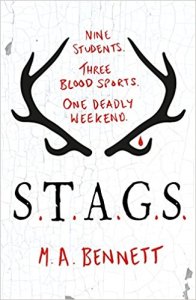 S.T.A.G.S (St Aiden the Great) is an elite educational establishment with a deep-rooted code of conduct. It’s where ‘old school’ rules and the practice of embracing traditional methods is the most acceptable way to conduct one’s self. The use of smart phones, kindles or even the internet itself is deemed to be ‘Savage’.

Student role play, maybe? A teenage fad, perhaps? Nope. It’s a movement of young folk who have, quite plausibly, adopted the title of the ‘Medievals’. Anything that clashes with the strange ideology of the cultured few will keep you outside their circle, and that’s a very isolated place to be.

What a relief then, to be among the ‘Savages’ who receive the highly-prized invitation to attend a ‘Medieval’s’ manorial estate for a spot of Huntin’, Fishin’ and a Shootin’. Oh my, if ever there was a weekend that should have health and safety crawling all over it was this one!

The location provides the perfect terrain for a spot of macabre recreation. One thing newcomers learn during their stay is: never underestimate your game – its instinct is to survive, it merely depends on who is stronger – the hunter or the prey.

I loved how the privileged hunting party operates in an aristocratic pack, yet successfully creates a distinctly primal atmosphere for their unsuspecting guests. Just how far this traumatic experience will affect them is for you to discover for yourself – all I know is “ Huntin’ Shootin’ Fishin’ ” is an invitation I’m unlikely to RSVP any time soon!

S.T.A.G.S heralds a terrific story line with a cracking pace and shows that moral rivalry is alive and kicking. One unfortunate irritation did arise from the over-indulgence of movie references, which began to resemble a compilation of nominees for best film/theatre production. I’m all for one or two of these casually thrown in for a nostalgia boost, but the overkill (excuse the pun) influenced what could have been a 5/5 rating from me.

Despite the fact that vulnerable creatures are targeted for sport, S.T.A.G.S is an exceptionally good read. The warped logic used to justify certain unethical behaviour was repulsive yet riveting, and I especially enjoyed the devious taunt from the conclusion – to be, or not to be, continued. Now that IS the question…

(I received a copy of this title from the publisher via their Reader’s First website and it’s my pleasure to provide this unbiased review.) 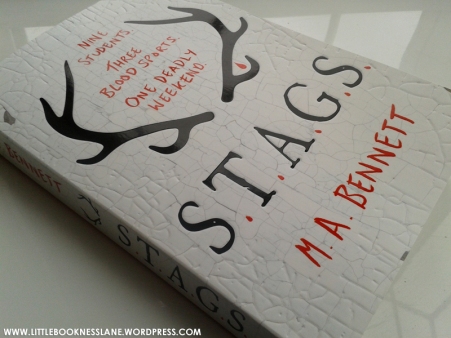 A twisting thriller for fans of Looking for Alaska.

It is the autumn term and Greer MacDonald is struggling to settle into the sixth form at the exclusive St. Aidan the Great boarding school, known to its privileged pupils as S.T.A.G.S. Just when she despairs of making friends Greer receives a mysterious invitation with three words embossed upon on it: huntin’ shootin’ fishin’. When Greer learns that the invitation is to spend the half term weekend at the country manor of Henry de Warlencourt, the most popular and wealthy boy at S.T.A.G.S., she is as surprised as she is flattered.

But when Greer joins the other chosen few at the ancient and sprawling Longcross Hall, she realises that Henry’s parents are not at home; the only adults present are a cohort of eerily compliant servants. The students are at the mercy of their capricious host, and, over the next three days, as the three bloodsports – hunting, shooting and fishing – become increasingly dark and twisted, Greer comes to the horrifying realisation that those being hunted are not wild game, but the very misfits Henry has brought with him from school…

M. A. Bennett is half Venetian and was born in Manchester, England, and raised in the Yorkshire Dales. She is a history graduate of Oxford University and the University of Venice, where she specialised in the study of Shakespeare’s plays as a historical source. After university she studied art and has since worked as an illustrator, an actress, and a film reviewer. She also designed tour visuals for rock bands, including U2 and the Rolling Stones. She was married on the Grand Canal in Venice and lives in north London with her husband, son and daughter.