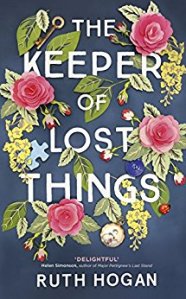 I flocked to The Keeper of Lost Things like a ravenous magpie as the cover and synopsis projected instant, heartwarming appeal. Who can resist a curious story where discarded, random objects find a foster home with an author who collects ‘lost things’ while he walks each day?

I just adored the care he took to label them with a description of the ‘find’ together with the date and its location before neatly storing it in its own drawer, with the hope that one day they may be reunited with their owner, of course.

But just how crucial is it that a hair bobble, jigsaw piece, or button is reunited with the person it once belonged to?

These unlikely treasures have their own unique story to tell, some with both positive and negative attachments. It offered me a new dimension to the things I take for granted when I’m on my own travels, making me consider how many hundreds of mundane items I have stepped over and never given a second thought to…

What if those inoffensive hair bobbles had fallen from someone’s ponytail if they were running, and was it toward something or away? Was it a significant day that would change their life, or perhaps it was just one like any other? What’s its story, and more importantly that of its owner?

The reason for the collection obsession is this: once upon a time the ‘keeper of lost things’ mislaid something of his own and despite sharing his life with Laura his assistant, Freddy his gardener, and Sunshine, who beautifully refers to herself as a Dancing Drome instead of having Downs Syndrome, he has never been able to find that ‘missing something’ and his heart aches dreadfully.

It’s part love story, part reminiscence and is balanced with sadness and hope. With underlying hints of an unusual clairvoyant perspective it shows how the little connections we make in life can leave behind a legacy of memories that are reawakened at the most unexpected moments.

Overall this book delighted me as it had a curious story-line that is both uplifting and thought-provoking. And yet, like The Keeper of Lost Things, I found myself looking for something; as threads from the past are spun with the present the fascinating and unique stories behind each abandoned object created a very pleasing fabric, just not the luxurious one I had been expecting.

Meet the ‘Keeper of Lost Things’…
Once a celebrated author of short stories now in his twilight years, Anthony Peardew has spent half his life collecting lost objects, trying to atone for a promise broken many years before.

Realising he is running out of time, he leaves his house and all its lost treasures to his assistant Laura, the one person he can trust to fulfil his legacy and reunite the thousands of objects with their rightful owners.

Hello dear readers, please allow me to introduce myself…

I was born in the house where my parents still live in Bedford. My sister was so pleased to have a sibling that she threw a thrupenny bit at me.

As a child I read everything I could lay my hands on. Luckily, my mum worked in a bookshop. My favourite reads were THE MOOMINTROLLS, A HUNDRED MILLION FRANCS, THE LION, THE WITCH AND THE WARDROBE, and the back of cereal packets, and gravestones.

I passed enough A levels to get a place at Goldsmiths College, University of London, to study English and Drama. It was brilliant and I loved it.  And then I got a proper job. I worked for ten years in a senior local government position: a square peg in round hole, but it paid the bills and mortgage. In my early thirties I had a car accident which left me unable to work full-time and convinced me to start writing seriously.

It was all going well, but then in 2012 I got Cancer, which was bloody inconvenient but precipitated an exciting hair journey from bald to a peroxide blonde Annie Lennox crop. When chemo kept me up all night I passed the time writing and the eventual result was THE KEEPER OF LOST THINGS, my first novel, which was published in hardback and ebook in January 2017 and is coming in paperback in September 2017.

Next year I will publish my second novel, A BEGINNER’S GUIDE TO DROWNING and you can pre-order the book now.

I live in a chaotic Victorian house with an assortment of rescue dogs and my long-suffering husband. I am a magpie; always collecting treasures (or ‘junk’ depending on your point of view) and a huge John Betjeman fan. My favourite word is ‘antimacassar’ and I still like reading gravestones.

4 thoughts on “Book Review: The Keeper of Lost Things, by Ruth Hogan”