We don’t deal in right or wrong. We deal in advantage and disadvantage. 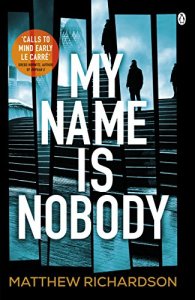 The intrigue of the old-school cipher trumps 21st century cyber in My Name is Nobody, which offers a timely, wholly relevant peek behind the scenes of security challenges affecting the world at large, and events much closer to home. Complex action thrillers are all well and good but it was refreshing to see a strong storyline combining classic methods to confront a contemporary menace.

Government operators are caught up in the covert Parliamentary machine acquiring intelligence, reacting to impossible situations, and fending off early indications that something in the machine is very, very wrong. It’s just a matter of identifying exactly what that something or someone is.

It’s Solomon Vine who is unofficially recruited to carry out this impossible task. Although currently suspended from duty, this talented spy has to root out the truth of an old friend’s disappearance after learning of a violent struggle at his home. And yet it’s not just Gabriel Wilde’s whereabouts he has to contend with, but also the circumstances surrounding the last time they met when a prisoner in Istanbul offered cryptic information yet became a target right under their nose.

The investigation is unauthorised which increases its complication factor and ease of denial, and what little evidence does taunt him only nurtures suspicions about his friend’s ulterior motives. And if Vine’s involvement is discovered any previous loyalty will not be taken into account as he’s already skating on thin ice after the Istanbul incident, a cruel souvenir of his many years of service.

What I like about Vine is that his outward appearance is one of relative normality when in reality he’s a codebreaking, number-crunching security analyst able to identify the severity of a terrorist threat by analysing the data he’s presented with. He’s not afraid to harness every ploy imaginable to fly under the radar. The problem being so does the elusive truth he is unsuccessfully chasing.

This story is a masterful performance of one man’s defiance to continue with his distinctive pursuit, despite the obstacles and warning signs – everything is connected, but those unruly dots refuse to line up without Solomon Vine’s unwavering perseverance.

My Name is Nobody is a solid British spy thriller with a very surprising outcome.

(I received a copy of this title from the publisher – complete with a cryptic challenge to solve! – and it’s my pleasure to provide an unbiased review.)

‘I know a secret. A secret that changes everything…’

Solomon Vine was the best of his generation, a spy on a fast track to the top. But when a prisoner is shot in unexplained circumstances on his watch, only suspension and exile beckon.

Three months later, MI6’s Head of Station in Istanbul is abducted from his home. There are signs of a violent struggle. With the Service in lockdown, uncertain of who can be trusted, thoughts turn to the missing man’s oldest friend: Solomon Vine.

Officially suspended, Vine can operate outside the chain of command to uncover the truth. But his investigation soon reveals that the disappearance heralds something much darker. And that there’s much more at stake than the life of a single spy…

Matthew Richardson was born in 1990 and graduated with a First in English from Durham University in 2011, where he was a Vice-Chancellor’s academic scholar and edited the student newspaper Palatinate. He then went on to postgraduate research at Merton College, Oxford, followed by a spell as a freelance journalist. Since then, Matthew has worked as a speechwriter and researcher in Westminster, writing pieces for a wide variety of publications, including the Times, Sunday Times, Daily Telegraph and New Statesman.

His debut novel, My Name is Nobody, is the first in the Solomon Vine thriller series and will be published by Penguin.

4 thoughts on “Book Review: My Name is Nobody (A Wilde and Vine Thriller), by Matthew Richardson”