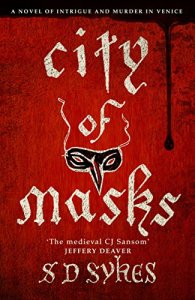 This third Somershill Manor Mystery has an entirely different vibe to its predecessors. It sails away from the familiar territory of Oswald de Lacy’s manorial commitments in Kent to transport us to the City of Masks, Venice 1358.

Considerable time has past since our ex-novice monk inherited the title of Lord Somershill and gained respect as an amateur sleuth and we are fast forwarded seven years from The Butcher Bird (book 2) for Oswald to embark on a pilgrimage to the Holy Land.

The aim of his journey is to help him recover from an unshakeable melancholy which is manifesting itself at untimely intervals. But it seems no matter how far he travels ,or how long he ignores his responsibilities at home, an oppressive gloom continues to track his hiding places before silently passing judgement.

There’s a real sense of dread for Oswald this time around. He has suffered miserably through no fault of his own and exhibits signs of some very dark thoughts indeed and struggles to face demons that are not revealed until later in the story. The reasons for his predicament were a giant leap from the inexperienced and immature Oswald I’d grown accustomed to during the last two books, so this development came as a bit of a surprise.

Ironically, it’s not due to any religious aspect of the journey that he finds solace. Instead he finds his spirits lift when playing games of dice with dramatic successes. Alas, his low mood is restored when losses mount up and he faces the threat of debt recovery, Venetian thuggery style.

Of course no voyage is without its minor irritations either. Yes, there’s his mother who has not only encouraged the entire ‘pilgrim ordeal’ but insists on accompanying him every step of the way. As expected she’s her usual tactless self, testing the patience of the company they meet – oh dear, she would be mortified if she knew how Oswald was spending his time and his limited funds!

Their travel plans are also disrupted by the brutal death of the grandson of an old friend the de Lacy’s are staying with during their stopover and the huge question hanging over Oswald is: will his sleuthing skills come in handy and strengthen his resolve, or will he crack under pressure when the ever-watchful authorities takes an interest in his involvement? It’s difficult to call, as his English title, together with the lesser known one of ‘Investigative Genius’ bestowed on him by his mother, are nothing compared to the callous motives of the murderer as the body count rises. I was partially right with their identity but I cannot say any more as this escalated into something I was not remotely anticipating!

This murderous diversion takes a desperately haunted Oswald into the most wretched parts of the city where he encounters unpredictable opposition from all quarters, redefines his people skills, and is pushed toward a darkness he can no longer turn his back on.

First appearances can be deceptive, and the City of Masks is no exception. Whispered secrets slither through a warren of filthy streets and murky waterways to leave a trail from where escape is not an option and discovery is deadly.

I hope there’s a new mystery in the pipeline soon as I adore this medieval crime series and every single character that breathes life into it.

(I requested a copy of this title from the Publisher and NetGalley and received a copy with my thanks, for which it is my pleasure to provide an unbiased review.)

A brilliantly dark and compelling novel set in Venice from ‘the medieval CJ Sansom’ (Jeffery Deaver) 1358. Oswald de Lacy, Lord Somershill, is in Venice, awaiting a pilgrim galley to the Holy Land. While the city is under siege from the Hungarians, Oswald lodges with an English merchant, and soon comes under the dangerous spell of the decadent and dazzling island state that sits on the hinge of Europe, where East meets West. Oswald is trying to flee the chilling shadow of something in his past, but when he finds a dead man on the night of the carnival, he is dragged into a murder investigation that takes him deep into the intrigues of this mysterious, paranoid city. Coming up against the feared Signori di Notte, the secret police, Oswald learns that he is not the only one with something to hide. Everybody is watching somebody else, and nobody in Venice is what he or she seems. The masks are not just for the carnival.

SD Sykes now lives in Kent, but grew up in Somerset and South London, before spending many years in the North West of England. She is a graduate from Manchester University, and has a Masters degree in Writing from Sheffield Hallam. She has a passion for medieval history and was inspired to finish her first novel after attending the novel writing course at literary agents, Curtis Brown. She has also written for radio, and has developed screenplays with Arts Council funding.