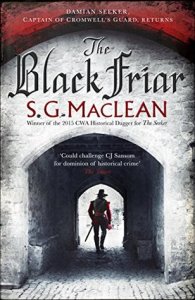 he Black Friar is an impressively tailored historical crime with a tremendous cast, whose contempt and naiveties are exposed with stunning brilliance.

No one can hide from The Seeker and it’s his duty to target anyone who appears on the Cromwell traitor radar. No matter how small the blip, it is documented and stored as evidence to be used against you and Captain Damian Seeker is one of Cromwell’s most effective agents. He bows his tall frame not out of respect to those around him but to prevent striking his head off the beams in properties he’s commissioned to search. Uncomfortable exchanges are no deterrent and he doesn’t walk away until he’s entirely satisfied with the answers they give.

Occasionally he stops by these places to innocently partake in a pie and ale. Yes, even the imposing Seeker has to eat and yet he draws the same looks from the patrons regardless of the reason for his visit – and that look is fear. He never commands silence as a hush falls upon a room as he enters, acknowledgement that he has stepped over their threshold and may inspect their conversations for treacherous slurs.

It’s now January, 1655. Two months have passed since we first met Damian Seeker (Book One) where there was much civil unrest to contend with. The country remains divided with Royalists rallying support for exiled Charles II and Cromwell’s agents rallying their forces to prevent it. The usual gentleman Seeker receives his instructions from has taken to his sickbed and temporary deputies in the form of opportunistic half-wits are trying Seeker’s patience. As they bustle through the corridors that connect the hive of intelligence at Westminster, we learn that the motives of those at the very epicentre of Cromwell’s cause cannot always be trusted.

And nor can the civilians, as public opinion sours by the day; the rich, the poor, pamphleteers stirring trouble through the written word, religious zealots, and agents so deep undercover they risk losing sight of themselves all have a part to play in this phenomenal tome.

A corpse presents further complications, as it was bricked up at Black Friars where Dominican monks have not been present for over a hundred and twenty years posing a quandary for many, including Damien Seeker. The tell-tale signs make it quite clear that the person was alive when they were entombed.

The corpse’s identity is the catalyst for the discovery of deeds that are as unpardonable as the plots stewing against the Lord Protector of the Commonwealth himself; the vulnerable are being targeted and even the emotionally resilient Seeker doesn’t like it. Despite their differences of opinion Lady Anne Winter makes a plea to the Captain to help locate her house maid who has vanished. During the course of his investigation into the murder of the ‘Black Friar’ he learns of more disappearances and cannot ignore their significance, or Lady Anne’s complicity in more pressing matters.

Through the labours of cypher cracking, cryptic clues and Seeker’s keen eye for spotting a discreet facial twitch to reveal the slightest lie, the mystery of The Black Friar and the missing children is slowly teased out. During that time, the Captain shows that a cold heart can thaw for the right cause, as beneath his armour and tenacity is a decency and humanity rarely witnessed or practiced by most.

From the anxiety that flickers in people’s eyes to the odours wafting out of a squalid cell, I admire the controlled reactions of the most recognised man in the city and the most misunderstood. I’m now eagerly awaiting the formidable Damian Seeker’s next assignment, which I believe will be his most challenging to date.

Note: While this could potentially be read as a standalone, I would suggest starting with The Seeker as this explores the Captain’s relationships with certain members of the cast already established in Book One.

(I received a copy of this title from the publisher and Olivia Mead with my thanks, and this is my unbiased review.)

Rebellion in the city, and a Royalist spy in his own ranks – Damian Seeker, Captain of Oliver Cromwell’s guard, must eradicate both in this action-packed historical thriller for fans of CJ Sansom, Rory Clements and The Three Musketeers.

London, 1655, and Cromwell’s regime is under threat from all sides. Damian Seeker, Captain of Cromwell’s Guard, is all too aware of the danger facing Cromwell. Parliament resents his control of the Army while the Army resents his absolute power.

In the east end of London, a group of religious fanatics plots rebellion. In the midst of all this, a stonemason uncovers a perfectly preserved body dressed in the robes of a Dominican friar, bricked up in a wall in the crumbling Black Friars.

Ill-informed rumours and speculation abound, but Seeker instantly recognises the dead man. What he must discover is why he met such a hideous end, and what his connection was to the children who have started to disappear from around the city. Unravelling these mysteries is challenging enough, and made still harder by the activities of dissenters at home, Royalist plotters abroad and individuals who are not what they seem…

Shona (S.G.) MacLean was born in Inverness and brought up in the Scottish Highlands. She obtained an MA and PH.D. in History from Aberdeen University. She began to write fiction while bringing up her four children (and Labrador) on the Banffshire coast. She has now returned to live in the Highlands, where her husband is a head teacher. ‘The Redemption of Alexander Seaton’ was short-listed for both the Saltire first book award and the CWA Historical Dagger; ‘The Seeker’ was winner of the 2015 Historical Dagger.

On dealing with plot problems, characters who’ve gone awol and issues of setting, Shona says, “My search for a solution tends to involve the dog and a pair of wellies. Most things can be solved by a stomp through the woods or along the banks of the Conon river. The dog is much more conducive to this kind of thing than the children, although I have realised that a close reading of my books reveals the true hero of most of them to be a canine (see esp. Alexander Seaton #3, Crucible, and The Seeker and its sequel The Black Friar (out October 2016), passim). Those dogs are, by seventeenth-century necessity, ‘hounds’, but I like to believe that in each of them beats the heart of a Labrador.”

To avoid work altogether, she suggests getting a bike.

The Seeker (Book One)