First things first, that cover looks all lovely and innocent, doesn’t it? Well that’s the first deceit right there, as beneath it lies a twisty little bleeder of a plot that’s constantly trying to evade you! There are so many intricacies to it that are loosely based on what is perceived to be the truth, what is proven fact (ha! You think?!), and what you can only put down to a vague tingly gut feeling. How to keep up with the constant shifting sands when practically every character is hiding something is quite something!

In the present day and in the first few pages an unlikely detective, Ben (Benedict) Taylor, is off duty, bombing down the lane to his cottage and casually seething about his domestic situation, when he hits a pedestrian standing in the middle of the road.

The unlucky victim, who you would expect should be in a county air ambulance right now, gets up and gives him more grief than his ex-wife. Even on this first encounter he knows he’s being played. The lies are already pouring from this regular little Pinnochio who calls herself Milla Graham, yet he invites her back to his home to get cleaned up. He predicted she’d disappear during the night, but grows increasingly concerned when she starts unintentionally cropping up at various intervals during his line of work.

We soon discover that Milla is not who she claims to be. In fact, her identity has already been claimed by two people so far 1) by a child who perished in a blaze some eighteen years ago at the residence of the Grahams, a wealthy publishing family and 2) by a corpse that was recently found in one of the Graham’s derelict properties along with the personal effects of, you guessed it, Camila Graham. Considering the Graham family publish fairy tales it’s apt that this story just gets curiouser and curiouser…

Despite wearing their best stiff upper lip and living in their very own ‘Graham bubble’, the family feign a reluctant interest in this Milla character and soon their twisted history is unveiled, along with a few of their odd ball traits. All of them engage in some pretty devilish and sinister behaviour until I wasn’t sure which one of THEM was telling porkies either!

Milla keeps her agenda close to her chest. I seriously couldn’t work out the riddle of whether she telling the truth or if she was simply a delusional con-artist working the crowd gathering around her. Her random antics certainly keep you on your toes wondering whether anyone can be trusted. All I can say is that everyone has a motive for something, and nothing is quite what it seems!

Heck, even the police start to appear decidedly dodgy after a while. Despite leading a predictably quiet life Ben Taylor has a few secrets of his own that he’d rather forget relating to his own shady family background, and breathing down his neck are his colleagues who are either deliberately trying to trip him up, or find his new selective policing routine annoying, as Milla Graham is usually the cause of it. The difficulty is that he’s not doing himself any favours professionally.

There’s some cracking banter between ALL of the characters allowing their utterly wonderful and equally wacky personalities to shine through. Sometimes their affronted thought processes are written in italics right before they chose to share a politer verbal response in the dialogue.

Trust me I Lie invites you through a series of doors that are opened just a crack, only to be snatched shut before you can step inside. It creates the most expertly deceitful read where the truth may be a very dangerous thing. If you’re looking for something different on the suspense and twistiness scale, with a sprinkle of amusement in just the right places, then I’d seriously recommend giving this a download.

(My thanks to the author for kindly providing a digital copy of her book in exchange for an unbiased review, with my sincere thanks.)

When Milla Graham arrives in the picture-perfect village of Buckley she tells everyone she’s investigating the murder of her mother, who died eighteen years ago. But there’s already one Milla Graham buried in the churchyard and another about to be found dead in the derelict family mansion.

Detective Inspector Ben Taylor has no life outside the police force. Even his own colleagues think he’s a boring stick-in-the-mud. But now he’s met Milla and his safe, comfortable life has been turned upside down. She’s crashed his car, emptied his wallet and is about to get him fired.

He knows she’s a liar because she cheerfully told him so.

Unless she’s lying about that too … 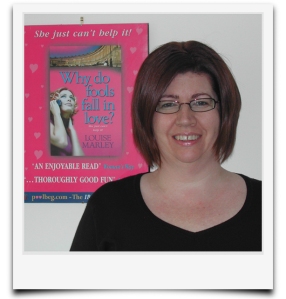 Louise Marley writes murder mysteries and romantic comedies. She lives in Wales, surrounded by fields of sheep, and has a beautiful view of Snowdon from her window.

Her first published novel was Smoke Gets in Your Eyes, which was a finalist in Poolbeg’s ‘Write a Bestseller’ competition. She has also written articles for the Irish press and short stories for UK women’s magazines such as Take a Break and My Weekly.

Her latest novel is Trust Me I Lie.

5 thoughts on “Book Review: Trust me I Lie, by Louise Marley”