I’m sure many people are familiar with The Grantchester Mysteries, either through the books or the ITV success featuring James Norton and Robson Green. If you’re not, then you’re in for a treat. Having thoroughly enjoyed the TV series myself I did wonder how close the storyline was to the books. Well, I’m pleased to say it’s a mirror image and for that I wasn’t disappointed.

I bought one of the books a few months back and haven’t got round to reading it yet, so when I received an email from Bloomsbury inviting me to download the first in the series via NetGalley it spurred me into action! 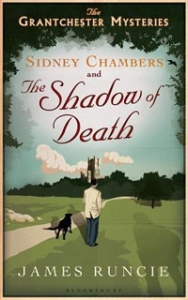 This volume is broken down into six short stories, making it very easy to digest. Each one succeeds in telling the life of bachelor Canon Sidney Chambers and his acquaintances and continues where the last one left off. People introduced in prior tales are re-introduced later, so everything is nice and familiar throughout.

What can we say about our lovely Sidney? He left the busy city life behind and now resides in the Cambridgeshire village of Grantchester. Our jazz loving vicar prefers whiskey to sherry, yet he’s far too polite to say, and having fought in the war he reflects on his experiences in times of trouble. Although he often neglects to write his sermons after getting roped into crime solving during his daily affairs, he draws inspiration from the cases to help him to conduct more enlightening services.

Given his occupation the world appears to find him easily approachable. Even if he has worries of his own they never show. In fact, he is described by a character in the book as having a ‘gentle face’. But his housekeeper doesn’t tend to agree, as she casts a disapproving eye over him and his black Labrador called Dickens!

And so, while ‘vickering’ Sidney often morphs into a reluctant amateur sleuth, as confidences are shared with him from all angles (mostly things he’d rather not know). In his position he can ask questions discreetly, and without betraying anyone he and his down-to-earth police pal, Inspector ‘Geordie’ Keating, try to solve all manner of crimes: from an apparent suicide that is thought to be a murder, the mysterious disappearance of a precious engagement ring at a New Year’s Eve party, someone playing God within the boundaries of the law, revenge being served along with the drinks at a jazz club, there’s the mystery of a rare forged painting, until lastly, a man’s private life could be made very public when he is attacked in front of witnesses, yet no one saw a thing…

I’m not sure if a book can be considered well-mannered, but there’s no other way to describe it. The pace and quality of the writing reflect the era of the 1950’s beautifully and the varied plots don’t try to get the better of you. What you will find is subtle clues and a perfectly relaxing read built on great characterisation and scene setting. It’s certainly reminded me how enjoyable the television series was and has left me wanting to experience more of it – and soon!

(My thanks to Bloomsbury UK for inviting me to read a digital copy of this title, downloaded via NetGalley.)

As seen on ITV’s Grantchester

Whether it’s a poisoned lemonade or a body on the college green, Sidney is first on the case, with his Labrador Dickens and his friend Inspector Geordie Keating never far behind.

Connect with the Author, James Runcie:

4 thoughts on “Book Review: Sidney Chambers and the Shadow of Death (Volume 1), by James Runcie”