Ruth, who was sixty but looked at least a decade older, lived down the street. She and Maggie were friends, but not friendly enough for Ruth to be in her house, holding her child, at almost eleven o’clock at night. Yet there she was, trying to hush the baby in the grey glow of the television… 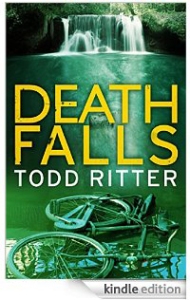 Pacey and full of surprises, this is a real a gem of a book.

I had absolutely no idea where the finger of suspicion was going to point next! The story had more twists than a tornado and the finale was spectacularly tense.

The story begins in the town of Perry Hollow on the night of the first moon landing in 1969. Ten year old Charlie disappeared whilst his mother and baby brother were asleep. Charlie’s bike was discovered, discarded in the notoriously fast running creek, and was ready to hurtle toward the dangerous falls. From that moment on, nothing would ever be the same again – a killer would make sure of that.

Decades later, following a promise he made to his mother, it fell to Charlie’s little brother, Eric, to try to piece together what happened that fateful night. Soon, he stumbles onto the path that other boys could be missing. But along the way he finds that some of the townsfolk are hiding a few skeletons in their cupboards.

You think you know what is happening, but scrub that – I challenge myself to try and guess the endings to books and films, but the outcome in this one was a complete – oh my…whaaaat?

I won’t elaborate any more, as it’s best to unravel this story for yourself. I thoroughly enjoyed the suspense and would highly recommended.

(Special thanks to the Publisher for the Kindle copy I received from NetGalley.)